Denver, Colorado – Armstrong Steel, through its philanthropic foundation, Armstrong United, announced its participation in the “Sock it to ‘Em” Campaign, a program focused on providing socks to the homeless of Metro Denver this December.

Armstrong Steel Employees donated over 100 pairs of socks to the cause during the 2016 holiday season. According to the campaign’s website, socks wear out faster than any other article of clothing and are the number one clothing need of the homeless.

We love organizing things like this! Every little bit counts,” said Ethan Chumley, CEO of Armstrong Steel and founder of Armstrong United, Armstrong Steel’s non-profit foundation. “Armstrong delights in participating in Holiday charity events, from our involvement with Toys for Tots over the years, to our employees’ appropriation of their own time with local charities in the Metro Denver area. This event gives clothing to some of the people who need it the most, and I’m proud of all of our extra efforts and contributions during the Christmas season.”

The “Sock it to ’Em” Campaign was launched in 2011 by Sue Lee, CEO of EQ Media and creator of “I Believe in Me!” When the entrepreneur recognized how many Americans face the harsh winter cold and dampness with inadequate protection for their feet, she asked a friend to join her in 2012 to form “Sock it to‘Em” and began soliciting fellow small business owners, churches, businesses and the local media to pitch in.

By the end of December 2012 the campaign gathered over 10,000 pairs of socks for the homeless in the Greater Denver Metro area and hundreds in small pockets across the USA. In 2015, the program collected almost 40,000 pairs of socks, and already in 2016, have far surpassed that amount, going over the 55,000 mark. The Sock-it-to-‘Em Sock Campaign aims to cover the feet of as many of those in need as possible before each new year. Their motto is, “We’re taking socks to the streets!”

Armstrong United has a long history of community involvement and making donations to children’s and civic charities. In addition to the current donation to the “Sock It To ‘Em” Campaign, Armstrong Steel contributes to organizations that are important to its employees and customers, such as the ALS Association, Peyton Manning Children’s Hospital, United Way, Project Angel Heart, Habitat for Humanity, Dumb Friends League, The Denver Museum of Nature & Science, the Children’s Diabetes Foundation, the Denver Art Museum, the Boy Scouts of America and the Boys and Girls Clubs of Metro Denver.

One of the biggest benefits to owning a steel building is how easy they are to maintain. However, anything worth significant value should still be maintained with great care. Because of their durability, steel buildings are meant to withstand all types of climate conditions. In poor weather, steel buildings also require very few repairs and… … 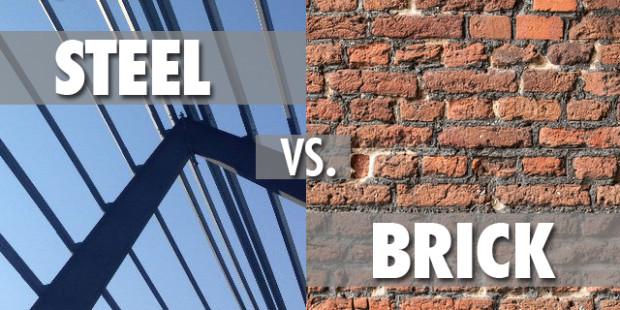 Steel vs. Brick: How Well Do You Know Your Building Materials?

Do me a favor. The next time you’re traveling down the highway, take a little extra interest in the construction projects of the area. You’ll pass a ton of different buildings of different construction. You’ll see wooden buildings, brick buildings and steel buildings alike. In fact, you might see some buildings, and not be able… …